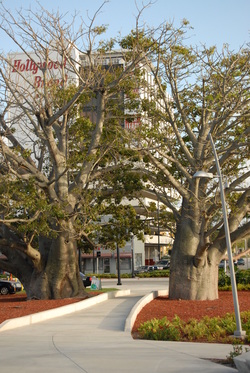 Baobab Tree or Tree of Life Photo by: Jason "Pepe"
Here I am standing in front of a 40 foot tall and nearly 20 foot wide tree that looks weird. Well I say weird but majestic is a much better word, once you spend a few minutes observing the tree. The Baobab tree looks like it was planted upside down. This is most noticeable when the tree losses it leaves when our winters sometimes cause them to defoliate. Baobab trees have a thick exterior bark resembling elephant skin. The bark has a unique ability to grow back and not just leave a scar on the damaged area like other trees. Baobab trees also produce edible leaves and fruits. They are also considered to have many medicinal properties.

The Baobab tree is known as the tree of life and with good reason. These trees can live for thousands of years. The enormous trees have huge swollen trunks that can hold thousands of gallons of water. In Africa the trees are tapped and plugged. Need a drink, thirsty explorer? Well just open the tap and pour yourself a drink!

These trees have actually served as shelters for some native people of the African continent to live in. Would you believe me if I told you that in Kenya, they even have trees so huge they are actual pubs.  Yes sir, you can go inside the living tree, have a seat and ask the bartender to pour you a beer. How cool is that? Now if you get pulled over for a DUI in Africa you might end up in a prison built right inside a Baobab tree. Really they have them or at least they did at one time.

The Baobab tree I am referring to is not in Africa. This incredible tree is right here in downtown Hollywood, Florida. Why don't you swing by the Arts Park at Young Circle and have a look for yourself? The arts park was built around the existing Baobab trees at the site and the park was opened in 2007.

According to some of the locals, Baobab trees were planted in Hollywood Between 1930 - 1940 but no one seems to know how they originated in Hollywood. One theory is that seeds or seedlings could have been obtained from Fairchild Tropical Botanical Gardens in Miami. Doctor David Fairchild was the first to discover the Baobab in West Africa circa 1927 and trees were planted at Fairchild Tropical Botanical Gardens in the late 1930’s. Other locals believe that the Wray family, founders of Flamingo Gardens in Davie Florida may have planted the trees.

It is reported, but I have not yet confirmed, that a Baobab tree still stands in Dania at the intersection of US1 and Griffin Road. Somehow this Baobab survived the Fort Lauderdale Hollywood Airport runway expansion. It is commonly agreed that Commodore Auylan Harcourt Brook an advertising executive who promoted Florida Tourism circa 1920’s planted a Banyan Tree at that location and the tree grew to reach a height of 160 feet. He also planted the Baobab tree that survives today on the site.

Baobab trees can be found growing in Coral Gables, Fairchild Tropical Botanical Gardens and you can also find one at Yesteryear Village at the South Florida Fairgrounds in West Palm Beach. That Baobab Tree was donated by Bob Reagan from Palm Beach County in 1999. He was loosing his property to an eminent domain order to make way for everglades restoration. Rather than see the tree destroyed by flooding he reached out to the non profit at Yesteryear Village. The staffers succeeded in raising $20,000 to up root and replant the baobab. The tree was moved and planted on the village grounds in February 2000. Below is a picture of the tree as of Feb 4, 2019. We will bring you more information about the Baobab Trees of South Florida in future articles. 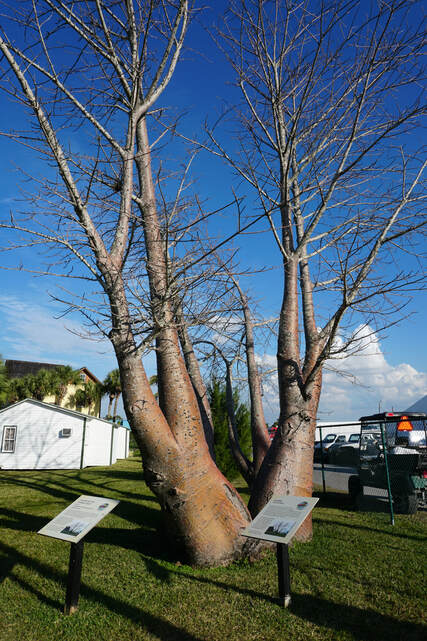 The Baobab Tree or Tree of Life is used as medicine and parts of the tree are reported to be  edible. The bark can be stripped and used to make rope. In Africa the fruit is eaten and the seeds made into flour. I do not encourage anyone to eat any part of this tree! Eat at your own risk! 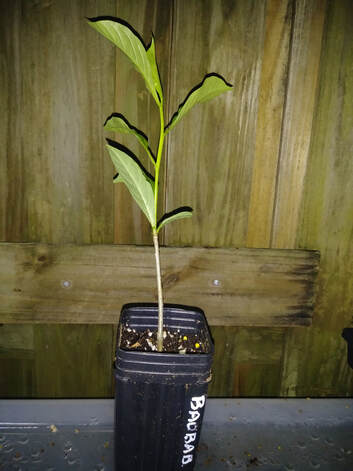 UPDATE: February 10th, 2021 Found the one near the airport.
​Also an article on this trees history below. 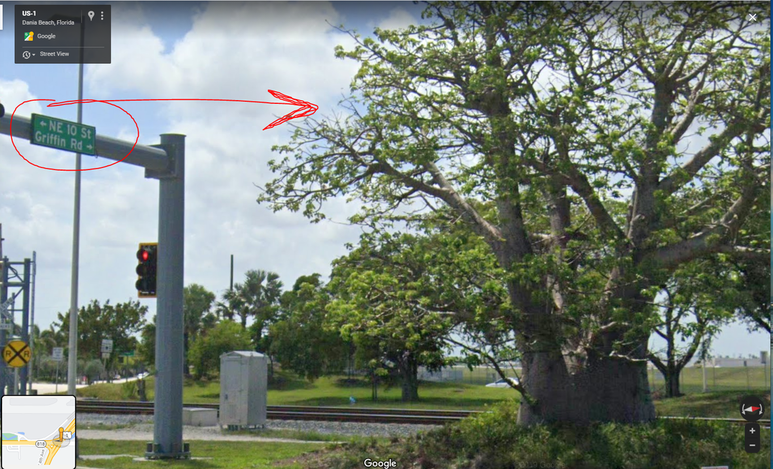 This is one South Florida visitor that established some really deep roots. It survived a transplant in the 1920s from Africa to Dania Beach. It survived the rerouting of U.S. 1 about 20 years ago, saved by public outcry on its behalf. It survived a bad pruning job, revived by state transportation officials. And now, the beloved baobab tree near the airport, at Griffin Road and U.S. 1, will survive construction of a new runway. The majestic tree is a Dania Beach landmark, said to be the first of its kind in the U.S. It was brought to America by Commodore Auylan Harcourt Brook, one of the area's most ardent and successful promoters. During the boom years of the '20s, the baobab and a companion banyan tree served as a tourist attraction, with their pictures plastered on billboards across the country. Visitors posed before the trees and snapped shots of themselves for folks back home. The banyan is gone, but the baobab will remain an uneasy neighbor next to one of the area's busiest thoroughfares. Officials at Fort Lauderdale-Hollywood International Airport said that although the new runway will be built over the top of U.S. 1, the tree will remain.
Brittany Wallman 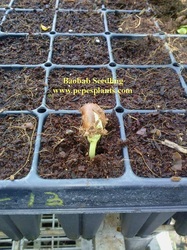 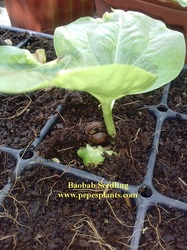 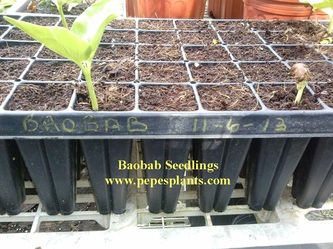 Here are some pictures of Baobab seedlings propagated in coir. I germinated these seeds quickly by heating them in a pot just below 212 degrees Fahrenheit. I then immediately planted them in a tray with only coconut coir. The Seeds began to germinate in just a few weeks. Many people say that the seeds need to be filed down so that water can enter the seed and reach the embryo. Well it looks like heating them did the trick quite well without nicking or filing them. In a few days when more seedlings begin to break the soil surface Seeds planted on 11/6/2013. More photos and information on how the Baobab seedlings are growing soon! Check out my video below on the Hollywood trees and the fruit and seeds.
Tweet
WILLIAM P. BROOK, EARLY SETTLER, DANIA'S FIRST FIRE CHIEF

By MARY C. WILLIAMS and Staff Writer
South Florida Sun-Sentinel
July 15, 1993
​
William P. Brook, the city of Dania's first fire chief and the owner of Brook's Wyldwood Tropical Nursery, died on Tuesday as a result of injuries from weekend car crash near South Bay.
Mr. Brook, an early settler in Dania and the nephew of one of Fort Lauderdale's most famous pioneers, was 86.
Mr. Brook was just a young boy when his mother died, and he moved to Fort Lauderdale from New York to live with his uncle, Commodore Auylan Harcourt Brook, a colorful character who was considered the city's patron of tourism.
It was Commodore Brook who promoted the city as a popular tourist spot in the early 1900s.
Mr. Brook lived with the commodore and his wife in their house on Southwest Ninth Street on the North Fork of New River.
"He was the Commodore's sidekick when he was a boy," Mr. Brook's son, Jim, said.
Mr. Brook attended Fort Lauderdale High School, and at age 15, he joined the Navy. How he got into the Navy is still a mystery to his family, Jim Brook said, but most conclude he lied about his age.
After a stint at sea, he returned to New York, where he met his future wife, Dorothy Bailey. They married in 1934 and moved to Dania, where they set up house at the botanical garden his uncle started in 1920 -- now Brook's Wyldwood Tropical Nursery.
Mr. Brook also became involved in city politics. He was named the city's first fire chief and served as a city commissioner.
As a businessman, Mr. Brook was a founding member of the Florida Nurserymen and Growers Association and served as a governor for the American Association of Nurserymen, the industry's national organization.
He is survived by two sons, James H. and William A. Brooks; eight grandchildren; and 10 great-grandchildren.
There will be visitation from 7 p.m. to 9 p.m. on Monday at Fred Hunter Funeral Home at 140 S. Dixie Highway, Hollywood. Funeral services will be at 11 a.m. Tuesday, at Dania Memorial Gardens.
More information: Source - https://journals.flvc.org/browardlegacy/article/view/79227/76572

Commodore A .H. Brook, who was nicknamed Fort Lauderdale's" one man Chamber of Commerce,' pioneered the development of the nation's first moving electric sign, staged Broward's first big-game fishing contest, helped to establish Port Everglades and effected the conversion of the old East Coast Canal into the Intracoastal Waterway.

In 1929 Brook opened "The Banyan, "a tropical tea room nestled beneath branches of a giant banyan tree located on his Wyldwood estate on U.S. 1 opposite the present day Fort Lauderdale-Hollywood International Airport, once known as Hinkley's hammock.

The first Broward County horticulturist and a Dania pioneer, George Hinkley had imported trees and shrubs from around the world and transformed the hammock into a Florida show place in the early years of this century.

This hammock was a popular picnic spot for early Dania settlers. News accounts relate that Seminoles had encamped in the hammock; in addition, Tequesta artifacts
In the early 1930's Dania exhibited the aspects of a small, unexciting town. Pictured above are one of the principal grocery stores and Dania's only bank. Behind the edifices on the main street is the open field where hard fought baseball and football games were played.-14-were discovered just south of the giant banyan tree.
(66) In 1917 Hinkley sold the hammock to Brook, who renamed it Wyldwood. Resold in 1946,the property subsequently housed an assortment of businesses, including a
restaurant and giftshop.