​The mangosteen is ultra-tropical. It cannot tolerate temperatures below 40º F (4.44º C), nor above 100º F (37.78º C). Nursery seedlings are killed at 45º F (7.22º C).   Morton, J. 1987. Mangosteen. p. 301–304. In: Fruits of warm climates. Julia F. Morton, Miami, FL.
​The mangosteen is one of the slowest-growing of the tropical tree fruits but it is also one of the longest living. Seedling trees normally require from 10-15 years to fruiting. The mangosteen is a dioecious evergreen tree, 6-25m high, with a straight trunk, up to 25-35cm in diameter and symmetrically arranged branches which form a regular, pyramidal-shaped crown. The bark is often dark brown or almost black, rugose, with a tendency to flake. The evenly-shaped and dense, leafy crown makes it a valuable shade tree (Plate 2). A yellow type of latex or resin is present in all the main tissues of the tree.

​Root structure The root system of the mangosteen is fragile, slow-growing and readily disturbed. Transplanting of seedlings has to be carried out carefully, care being taken not to damage to long tap root which has very few laterals. Root hairs appear to be absent on both main and lateral roots. Bordeaut and Moreuil (1970) have described the development of the root system of mangosteens growing in the Ivory Coast and observed that, in trees 3-8m tall and with a canopy spread of 2-5m, the main portion of the root system developed at a soil depth of only 5-30cm; the longest root did not extend to more than one meter from the base of the trunk.

Among the cultivated tropical tree fruits, the mangosteen ( Garcinia mangostana L.), which was named after the French explorer Laurent Garcin (1683-1751), is probably one of the most limited in geographical origin and distribution. A native of South-east Asia, this species has remained localised mainly in its native habitat; this is probably due to its rather specialised ecological requirements. In addition, establishment is relatively difficult, since seedlings are slow to grow, even in their natural environment. Mangosteen trees grow naturally as understorey plants in forest communities. In cultivation, shading is therefore beneficial during the first 4 to 5 years of early growth and this is often provided by other trees which are normally grown in mixed holdings. Traditionally, the mangosteen has been propagated by seeds. These are produced apomictically, without fertilization, and they therefore produce seedlings which, when fully grown, are identical to the parent tree.​ 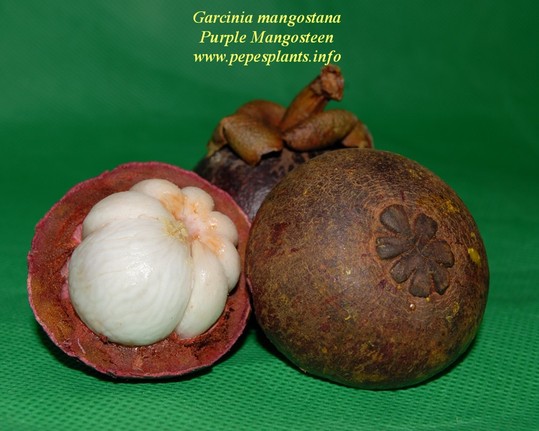 ​We hope to have some small seedling trees available of  Garcinia mangostana by summers end if all goes well. Seeds are difficult to germinate and take several months.

​Mangostana is for the fruit adventurer that likes a real challenge in attempting to push the normal growth range of trees.

G. mangostana trees have an extremely long and delicate tap root, that can be several feet long. That means it will be very difficult even for the seasoned extreme tropical fruit grower.

Growing the 'button mangosteen' (Garcinia prainiana) is an attractive alternative to growing its namesake, the true mangosteen (G. mangostana). Some of the writer's button mangosteen plants have flowered in their pots when only two feet high. This suggests the possibility of this Thai/Malaysian tree fruiting years before a seedling mangosteen even flowers. Both the button mangosteen and the mangosteen are intolerant of low temperatures. However, when it gets cold, it is far easier to bring a 3-gallon potted button mangosteen inside than to cover up and protect a bearing size, 12 ft. to 15 ft. mangosteen growing outside.

Growing the button mangosteen in containers is a wonderful opportunity for the adventurous indoor or patio gardener.

The button mangosteen, also known as cherapu, is a small to mid-size tree indigenous to the Asiatic tropics, where it occurs in Thailand and Malaysia. Seeds of this Garcinia were received by the writer in 1980.

Three of the resulting seedlings, upon reaching a height of one metre, were planted out in the writer's Bal Harbour grove, just north of Miami Beach.

It was soon discovered that this mangosteen relative required partial shade in its juvenile stage. To eliminate the adverse affects of full sunlight, an overhead 63% shade cloth top was erected, the sides remaining open. In 1988, the first fruit appeared, although some of the plants in three-gallon containers had flowered a few years earlier. At about the same time, Adolf Grimal, on Big Pine Key 20 miles north of Key West, reported one of his trees from the same seed batch to be in fruit.

The button mangosteen has similar foliage to the mangosteen, with attractive dark green, shiny leaves about 8 inches long by 4 inches wide, the undersides pale green with prominent veins. The base of each leaf appears to wrap around the branch, as if it had no petiole. Young twigs and branches are dark green turning to a brownish gray with increasing size and maturity. The trees are dioecious, requiring both a male and a female to bear. The beautiful rose-colored, camellia-like flowers of both sexes are about 1½ inches wide. Because both appear so much alike, it takes a close inspection to see which has the pollen and is the male. The bloom, which appears singly or in tight clusters, gives this Asiatic tree a highly ornamental appearance.

The attractive bright-orange fruit, standing out in sharp contrast to the deep-green foliage, appear from mid-summer into fall. Hand-pollinating was found to be followed nearly always by successful fruit set. The name 'button mangosteen' would seem to originate from the fruit's flattened, button-like appearance, and of course, its similarity to its famous relative. The soft, orange-colored flesh contains two or more seeds. In describing this Asian delicacy, Betty Molesworth Allen, in her book Malayan Fruits, wrote "The fruits are delicious, with an unusual flavor as well as being excellent thirst quenchers". This writer found the button mangosteen's fruit to be sweet with a tinge of tartness that should appeal to most people's palate.

​Remember, you need two plants, a male and a female. The two sexes are easy to tell apart by their blooms. The female has no pollen, while the male has a heavy ring of highly visible pollen circling its center. Otherwise, these beautiful flowers, which usually come in clusters, look identical in size, shape and color.
Some growers graft a male branch onto a female tree to aid in pollination.