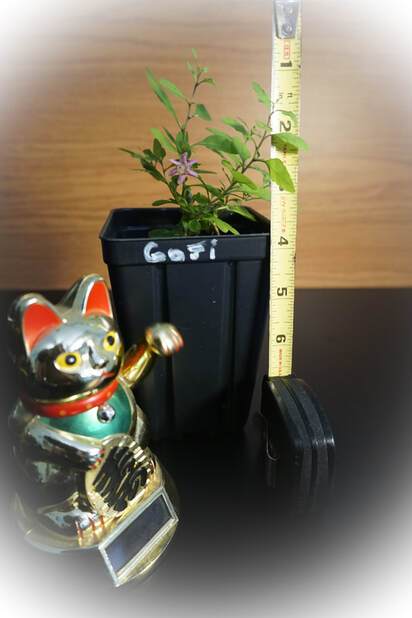 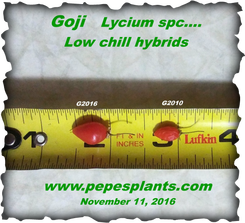 Tips for Growing Goji Plants
This information is for growing in warmer climates like Florida.

Pepe Growing Tip:  Flowers and fruit form on the previous years stems, so prune to encourage the production of new wood.

Pruning & training: Consider if it is most practical to grow as a bush or as a vine. Train to grow against a fence, trellis or on a wire. Prune in spring, all the dead wood and open up the plant for good air circulation and light penetration.

Goji berries are native to the lush green valleys of China, and the Himalayas. They have been used in Traditional Oriental Medicine. The plants have been cultivated in China, Korea, and Japan for at least a thousand years. The berries are high in antioxidants and other beneficial compounds.

In China, commercial production focuses on L. barbarum. Here in the the USA, both varieties are found growing in almost every State.

Before we get to far along here, let us understand that Wolfberry plants aka Goji plants are two very similar but separate species.The plants both are referred to as Goji or Wolfberry. They are two species among several other Lycium species.

So what is the difference between these plants?

Not much difference in appearance, except for the leaves.

The fruit of L. barbarum is of much higher quality than L. chinensis. In China, commercial production focuses on L. barbarum. Here in the the USA, both varieties are found growing in almost every State.

Lycium barbarum  has narrow leaves (more than three times as long as wide) that are acute at apex and taper at both ends.

Lycium chinense has much wider leaves (less than three times as long as broad), widest below middle and acute at apex.

Introduction to the plant's benefits

The Goji berry plant is considered an amazing "super food" These plants are in the genus Solanaceae. They are related to tomatoes and eggplants.

The Goji berry is often referred to as the longevity fruit. The native people of regions that cultivate and eat these berries have been know to live to be 100 years of age.

The Goji plant and berry is considered an adaptogen, The term adaptogen is used when discussing medicinal plants. A plant that contains natural compounds that increases the body's resistance to stress, trauma, anxiety and fatigue is an adaptogen. Goji berries are believed to balance the entire body, resulting in enhanced stamina, strength, energy and longevity. Additionally they assist the body in maintaining a strong immune system to fight off many diseases.

The berries are very similar in size to cranberries. The color is a light orange to a deep red. The taste is like a cross between a cherry and a cranberry. Some varieties are bitter sweet, while others are much sweeter.

You can find dry berries in many oriental markets. 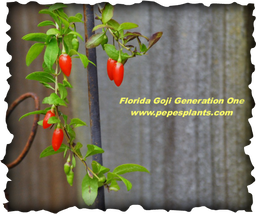 We have been working for over three years on cross breeding low chill goji plants. The goal is good flavor, high productivity and the ability to produce with low chill requirements. Well it looks like we may almost have a winner!

For several years, I grew a wide variety of Goji plants. I obtained plants, seeds and cuttings from many sources. Some of my first plants were from specialty nurseries in and out of the United States. I tried and tried but all the plants grew into big bushes with a few flowers and no fruit.

Sometimes, people do things that just don't seem to make any sense. Well after trying to grow and fruit goji plants in South Florida for several years, I finally concluded it was a waste of time and energy. Then something interesting happened. A very nice gentleman (Gary) from Central Florida stopped by the nursery and started talking about goji plants. He was growing several plants given to him by a friend. His plants grew fast and produced very heavy crops several times a year. The plants originated from China and had been growing in Central Florida for many years.The plants came over as cuttings some thirty odd years ago.

Now, I was convinced he was successful because of the lower temperatures he had available. I told him that here in South Florida we just would not achieve the same results. I explained I had given goji plants my best efforts and never managed to get fruit.

Nevertheless he persuaded me to take and grow one of his Goji plants. He was sure they had some special characteristic that allowed them to set fruit with just a few nights in the of 45-50 degrees range. He reasoned that he had one year old cuttings produce abundant fruit without much chill at all.

I must admit, I was quite skeptical, but agreed to give it a go. I got the plant in July of 2013 and it was about 8 inches tall.This little cutting was nice, green and very healthy. I asked Gary if the cutting had experienced any cool weather while he was growing it. Gary assured me that he started the cutting in May of 2013 and temperatures were way above 50 degrees at night in Central Florida.

So here we are December 18, 2013 and I have a beautiful goji plant in a three gallon pot about two foot tall and loaded with goji berries.

Now it's time to start propagating and evaluating this goji for consistency and flavor. Well, according to Gary this is going to be amazing. Stay tuned more updates soon!

Note:
Goji berries are also grown in China near Beijing. Interestingly Beijing China is a sub tropical region. Could this be a factor in the fruiting success of this Goji cultivar?